Musculature and Fasciae of the Pelvis

Musculature and Fasciae of the Pelvis

The coccygeus muscle runs between the ischial spine and the lateral aspect of the sacrum and coccyx, overlying the SSL.  The LAG is comprised of the puborectalis, pubococcygeus, and iliococcygeus, named according to their respective points of origin (Fig.  4).

Laterally, this broad sheet of muscle is attached to the pelvic sidewall by the arcus tendinous fasciae pelvis (ATFP). The ATFP is a curvilinear condensation of the pelvic fascia overlying the obturator internus muscle from the ischial spine to the lower aspect of the pubic symphysis. The obturator internus is located on the pelvic sidewall and passes through the lesser sciatic foramen to insert on the greater trochanter of the femur (2). 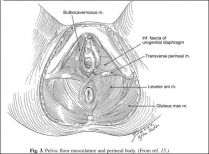 The ATFP provides support for the majority of the anterior pelvic diaphragm to the bony pelvis and is often utilized for support during pelvic floor reconstruction. 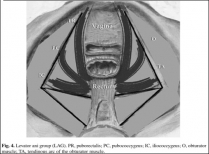 Midline apertures in the LAG allow passage of the urethra, vagina, and rectum. These apertures are collectively referred to as the levator hiatus. The dimensions of the hiatus can vary depending on parity (Fig. 5).

The LAG and associated fascial attachments provide a dynamic hammock of support for these structures, contributing significantly to urinary and fecal continence. The endopelvic fascia is a viscerofascial layer, superior to the LAG, just beneath the peritoneum and covering adjacent organs (2).

Fig. 5. Levator hiatus. (A) Normal levator floor and vaginal hiatus. (B) Attenuation and separation of the levator fibers and widening of the posterior vaginal hiatus with parity. 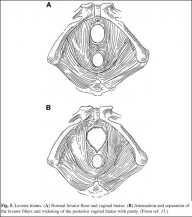 There are several condensations of levator ani fascia that serve discrete functions. For example, the medial edge of the LAG fascia corresponds anteriorly, around the bladder, to the pubocervical fascia and posteriorly, around the cervix, to the cardinal and uterosacral ligaments. The uterosacral and cardinal ligaments are important fascial condensations involved in supporting the uterus and upper vagina and are discussed in the section on genital structures.

The pubocervical fascia, also known as the vesicopelvic ligament, is a continuous band of connective tissue from the pubic symphysis to the cervix (Fig. 6).

The fascia is a fusion of the superior layer of levator ani fascia (endopelvic fascia) and the posterior layer. The fascia fuses anteriorly with the periurethral, perivesical, and anterior vaginal wall fascia and posteriorly to the cardinal ligament complex. Attenuation of this fascial support, either laterally from the ATFP or centrally, results in a cystocele.

The pubourethral ligaments support the urethra to the inferior pubis, just proximal to the striated sphincter. The urethropelvic ligaments are derived from a fusion of the endopelvic and periurethral fascia and are continuous with the pubocervical fascia laterally (Fig.  7).

These ligaments attach laterally to the ATFP on the pelvic sidewall, providing crucial support to the urethra and anterior vaginal wall.

An understanding of the supporting structures of the pelvis is essential for successful reconstructive surgery.