The lower urinary tract originates from the cloaca, the section of primitive hindgut into which the mesonephric ducts and embryonic ureters drain.

Between the fourth and sixth weeks of gestation, the cloaca is subdivided by the descent of the urorectal septum towards the perineum and by lateral ingrowth of the folds of Rathke. The effect is to compartmentalise the cloaca into the urogenital canal anteriorly and the anorectal canal posteriorly.

While the bladder is taking shape in the upper portion of the urogenital canal,  the distal ureter and mesonephric duct begin to separate.

The mesonephric ducts migrate caudally to join into the developing posterior urethra,  whereas the ureters remain relatively fixed at their point of entry in the developing bladder (Figure 1.9).  The adjacent mesenchyme of the pelvis undergoes differentiation into the detrusor, a smooth muscle component of the bladder wall,  in response to induction by contact with the embryonic urothelium. 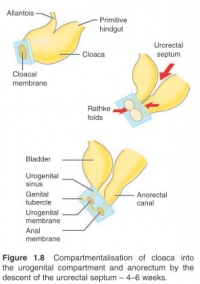 Figure 1.8   Compartmentalisation of cloaca into the urogenital compartment and anorectum by the descent of the urorectal septum – 4-6 weeks.
The allantois protrudes from the dome of the fetal bladder like an elongated diverticulum, extending into the umbilical cord. Subsequently, the obliterated allantois persists as the median umbilical ligament.  Rarely,  the allantois remains patent, giving rise to a congenital umblical urinary fistula (patent urachus) or an encysted remnant.

Clinical considerations
The spectrum of cloacal anomalies encountered in clinical practice correlates closely with varying degrees of failed or incomplete descent of the urorectal septum.

The embryological origins of bladder exstrophy and epispadias are less readily apparent, but probably result from early defects of the cloacal membrane. Incomplete ureteric duplication results from bifurcation of the ureteric bud.

Complete ureteric duplication is characterised by a pattern of ureteric anatomy in which the ureter draining the upper pole paradoxically enters the urinary tract more distally than the lower pole ureter (in some cases draining ectopically into the vagina).

This anatomical configuration (described by the Meyer-Weigert law)  occurs when the mesonephric duct separates from the embryonic lower pole ureter and descends towards the developing posterior urethra (with a tendency to take the upper pole ureter with it).