In the cervical portions of the paired blocks of intermediate mesoderm the primitive precursor of the kidney,  the pronephros,  first appears in the fourth week of gestation.

This structure rapidly regresses in the human embryo.  The midzone mesonephros, however, continues to differentiate, giving rise to tubular structures which,  although ultimately destined to contribute to the definitive gonad,  function briefly in an excretory role.  In the mesenchyme lying lateral to the developing mesonephros, the mesonephric ducts appear, advancing caudally to fuse with the terminal portion of the hindgut (the primitive cloaca).

Canalisation of the mesonephric ducts creates a patent excretory unit which is believed to function transiently. 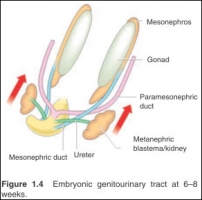 Between the sixth and 10th weeks the lobulated embryonic   kidneys   ascend   up   the   posterior abdominal   wall,  deriving   their   blood   supply sequentially at different levels until the definitive lumbar position is achieved (Figure 1.4).

The formation of nephrons within the developing kidney is an example of ‘reciprocal induction’. The ureteric bud derivatives give rise to the renal pelvis, major calyces,  minor calyces and collecting ducts, whereas the glomeruli,  convoluted tubules and loop   of   Henle   are   derived   from   metanephric mesenchyme.  Urine   production   commences   at around the 10th week,  when continuity is established between the distal convoluted tubules and collecting ducts.  Proliferation of the ureteric bud derivatives ceases at around 15 weeks,  but new generations of nephrons continue to appear sequentially within the renal cortex until 36 weeks. At that time the process of nephrogenesis ceases and the number of nephrons within each kidney remains fixed for life. There is considerable variation in the number of nephrons within a normal kidney, with a median value of approximately 700 000.

Nephrogenesis   is   the   subject   of   extensive research to identify the molecules responsible for cell-to-cell signalling.  A large number have already been identified, including growth factors, transcription factors (DNA-binding proteins that regulate gene expression) and adhesion molecules.

The rennin-angiotensin system has recently been found to play an important role in regulating early differentiation and development of the urinary tract. Two different tissue receptors are responsible for mediating the actions of angiotensin 2. Whereas stimulation of the angiotensin type 1 receptor promotes cellular proliferation and the release of growth factors, stimulation of the angiotensin type 2 receptor, which is expressed mainly in the embryo and fetus, mediates apoptosis (programmed cell death) and diminished cell growth.

Differing patterns   of   renal   malformation   are   observed in transgenic ‘knock out’  mice,  depending on whether the gene encoding for the type 1 or the type 2 receptor is deleted.  Targeted ablation of the uroplakin 3 gene results in a convincing experimental model of primary vesicoureteric reflux.  But,  whereas the wealth of information being revealed by molecular biology is advancing our understanding of inherited renal disease, experimental findings do not always translate readily into the clinical setting.

For example, screening of patients with vesicoureteric reflux for mutations of the angiotensin receptor 2 gene and uroplakin 3 gene have yielded uniformly negative results.

Clinical considerations
The normal embryological development of the upper tract is heavily dependent on the role of the ureteric bud. Faulty or failed interaction between the ureteric bud and metanephric mesenchyme results in renal agenesis or differing patterns of renal dysplasia.

Renal agenesis
One or both kidneys may be congenitally absent, either as part of a syndrome or as an isolated anomaly. The origins of renal agenesis include:

This common renal anomaly has been shown to involute both in utero and in postnatal life to mimic the findings of renal agenesis.

Renal dysplasia
‘Dysplasia’  is a histological diagnosis in which the internal architecture is disordered and characterised by the presence of immature ‘primitive’ undifferentiated tubules and the inappropriate (metaplastic) presence of cartilage and fibromuscular tissue.  The kidney is usually smaller than normal. Renal dysplasia results from faulty interaction between the ureteric bud and metanephric tissue, or from a major insult to the embryonic and fetal kidney, e.g. severe obstructive uropathy. 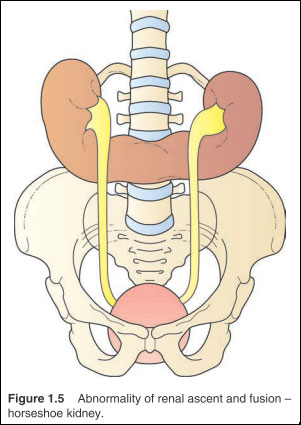 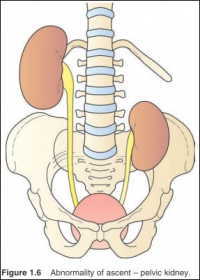 Cystic anomalies
The patterns of cystic renal disease and their aetiology are considered in another section.  There is some evidence to suggest that defective development of the ureteric bud is implicated in the causation of multicystic dysplastic kidney.

Abnormalities of renal ascent and fusion
This spectrum of renal anomalies including pelvic kidney, horseshoe kidney and crossed renal ectopia dates from the sixth to the ninth weeks of gestation, when the embryonic kidney is ascending to its definitive lumbar position. Horseshoe kidney has a reported autopsy incidence of 1:400 (Figure 1.5).

Fusion of the lower poles of metanephric tissue interferes with the normal process of renal ascent, vascularisation and rotation.  Pelvic kidney (Figure 1.6) and crossed fused renal ectopia (Figure 1.7) provide further examples of anomalies resulting from defects of ascent and fusion of the embryonic kidney.
{pagebreak}

The fetus is in effect,  dialysed by the placenta, which fulfils the homeostatic excretory role of the kidney until the time of delivery. For this reason, anephric fetuses may survive until term. 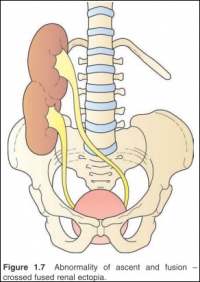 The fetal kidneys, however, do serve the important role of producing increasing volumes of urine,  the most important constituent of amniotic fluid.  By the 36th week of gestation it is estimated that fetal urine accounts for approximately 90%  of the amniotic liquor. A reduction in the production of fetal urine as a result of renal damage (agenesis or dysplasia) or obstructive uropathy causes oligohydramnios and consequent moulding deformities of the fetus and pulmonary hypoplasia. Amniotic fluid in sufficient volume is an essential factor contributing to normal fetal lung development.