Although no clear criteria exist for differentiating neurogenic from idiopathic DO, it has been suggested that unstable bladder contractions occurring as a result of neurological disease may be more likely to result in urge incontinence (17) and have a greater amplitude. Regardless, perhaps the most common urodynamic pattern seen in patients with idiopathic OAB is symptomatic urgency reported during filling without the finding of DO (so-called sensory urgency). It is well established that, in up to 74% of patients with frequency or urgency symptoms and in as many as half of patients with urge UI, DO may not be seen during urodynamic testing (18). Interestingly, data suggest that, of the four symptoms most commonly associated with OAB (frequency, urgency, nocturia, and urge incontinence), it is the specific complaint of frequency that may be most readily linked to the urodynamic finding of DO (19). Frequency and urgency symptoms and urge incontinence all appear to be associated with earlier first sensation during UDS.

In general, nonphasic low-grade overactive contractions during voiding appear to be the most common pattern seen with idiopathic detrusor overactivity.

Idiopathic detrusor overactivity need not always be completely benign, however.

Even patients without a clear neurological basis for their overactivity may experience intense detrusor spasms resulting in significant incontinence.  Presumed bladder wall damage from other processes, such as radiation, may induce changes in bladder wall compliance (Fig. 2), resulting in severe frequency and OAB symptoms.

Radiation can also induce high-grade bladder overactivity even several years out from the time of treatment, as seen in the urodynamics obtained from a woman who was over two decades out from radiation treatment for uterine cancer who suffered from intense urinary urgency and extreme frequency (Fig. 3).

Stress-induced OAB contractions have also been described. Although the precise etiology is not proven, it is believed that coughing or other maneuvers that induce urine to be deposited beyond the bladder neck into the proximal urethra can induce bladder overactivity.

Typically, leakage associated with stress-induced overactivity is difficult to differentiate based on history or physical examination alone, and UDS are the most effective means of determining the true cause of incontinence, which often is a result of both sphincteric weakness and abnormal detrusor instability (Fig. 4).

Terminal detrusor overactivity, which occurs at the end of filling, can develop in the absence of any definable intrinsic bladder or bladder outlet abnormality and may be associated with urge incontinence when the bladder contraction cannot be suppressed (Fig. 5).

In an analysis of urodynamic characteristics of DO, Defreitas and colleagues noted that men with BOO-induced DO were more likely to have terminal DO only in comparison with men with DO secondary to Parkinson’s disease (PD), in whom the DO occurred throughout filling (17). In many cases, the urge to void can be temporarily suppressed, and the bladder contraction itself can subside if filling is terminated. 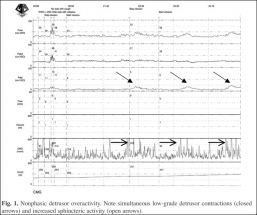 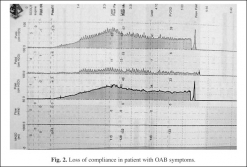 Fig. 2. Loss of compliance in patient with OAB symptoms. 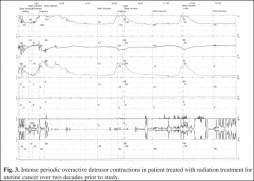 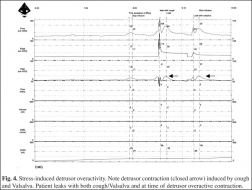 If terminal DO occurs after a normal fill volume, then typically this urodynamic pattern would be associated with urgency and potential urge incontinence episodes in the absence of severe frequency.