The internal and external genitalia of both sexes are genetically ‘programmed’ to differentiate passively down a ‘default’  female pathway unless actively switched down a male pathway by the genetic information carried by the testis-determining gene (SRY).  Until the sixth week of gestation,  the genitalia of both sexes share identical embryonic precursors.  Differentiation   of   the   gonads   and genital tracts is initiated by the migration of primordial germ cells from the yolk sac,  across the coelomic cavity to condensations of primitive mesenchyme in the lumbar region of the embryo.

By a process of reciprocal interaction, the germ cells and surrounding mesenchyme form the primitive sex cords within the embryonic gonad.

At around this time (6 weeks),  the paired paramesonephric ducts appear as cords of coelomic epithelium lying lateral to the mesonephric ducts.  From this stage onwards, the pathways of male and female differentiation diverge.

Internal genitalia
Although the primitive sex cords degenerate, secondary sex cords derived from genital ridge mesoderm enfold the primordial germ cells to form primitive follicles.  Differentiation of the genitalia down a female pathway cannot be entirely explained by the absence of the SRY gene. Normal development of the ovary does appear to at least be partly dependent on the presence of the two normal X chromosomes, since patients with Turner syndrome who have a single X chromosome (X karyotype)  typically have poorly formed, dysgenetic ovaries.

In the female, the initial phase of gametogenesis (transition from primordial germ cell to primary oocyte)  occurs within the fetal ovaries.

Figure 1.10   The undifferentiated genital   tract   is   genetically   programmed   to   proceed   down   the pathway of female differentiation unless switched down the male pathway by the SRY gene.

During fetal life these primary oocytes embark on the first phase of meiotic division before entering a long phase of arrested division,  which resumes again only at puberty. In the absence of testosterone, the mesonephric ducts regress (leaving only vestigial remnants –  the epoöphoron,  paroöphoron and Gartner’s cysts). The paramesonephric ducts persist in the form of the fallopian tubes. Distally, the fused portions of the paramesonephric ducts give rise to the uterus and upper two-thirds of the vagina.

At the junction of the paired paramesonephric ducts with the urogenital sinus a condensation of tissue, the sinuvaginal bulb, develops. Between the 10th and 20th weeks of gestation displacement of the sinuvaginal bulb in the direction of the fetal perineum separates the developing vagina from the urethra.  During this process,  canalisation of the vagina occurs. The upper two-thirds of the vagina is derived from the paramesonephric ducts,  whereas the distal third has its origins in the urogenital sinus and the introitus and external genitalia are derived from ectoderm.

External genitalia
In the absence of androgenic stimulation,  the external genitalia of the embryo and fetus differentiate passively down a female pathway. The genital tubercle gives rise to the clitoris,  the urogenital sinus contributes the vestibule of the vagina, while the urogenital folds persist as the labia minora, and the labioscrotal folds persist as the labia majora.

Internal genitalia
Current evidence indicates that differentiation of the male genitalia is initiated by a single testisdetermining gene (SRY) located on the Y chromosome   and   then   mediated   through   other   Y chromosomal and autosomal ‘downstream’ genes.

The gene product expressed by the SRY gene is responsible for stimulating the medullary sex cords to differentiate into secretory pre-Sertoli cells.

In the male the paramesonephric ducts disappear completely, with the exception of vestigial remnants (the appendix testis and utriculus).

Figure 1.12   Differentiation of the male genital tract in response to mûllerian inhibitory substance and testosterone.

At least three important properties are ascribed to MIS:

1.  MIS stimulates regression of the paramesonephric ducts.
2.  Production of testosterone by the Leydig cells of the embryonic testis is initiated by MIS from the ninth week of gestation. During the 12th to 14th weeks of gestation the fetus is exposed to very high levels of androgenic stimulation.
3.  The first stage of testicular descent is mediated by the action of MIS on the gubernaculum, which anchors the embryonic testis in the vicinity of the developing inguinal canal.

Figure 1.13   Differentiation of the external genitalia determined by androgenic stimulation.

In contrast to the germ cell differentiation initiated in the female embryo, male primordial germ cells are inhibited from further division within the embryonic gonad.  Although gametogenesis does not commence until after puberty the testis is not entirely quiescent in childhood since there is evidence that the fetal gonocyte germ cell pool transforms into adult type gonocytes in early childhood. The mesonephric duct derivatives differentiate between the eighth and 12th weeks of gestation to give rise to the epididymis, rete testis, vas deferens,  ejaculatory ducts and seminal vesicles.  This occurs in response to exposure to testosterone (probably by diffusion) from the developing testis.

The   development   of   the   prostate   gland   is dependent   upon   circulating   testosterone   and provides a further example of reciprocal induction.

Proliferation and branching of the endodermal lining of the urethra (which gives rise to the ducts and glanular acini of the prostate gland)  induces differentiation of surrounding mesenchyme to form the capsule and smooth muscle,  a process that ceases after the 15th week of gestation.

From the seventh week of gestation the male urogenital sinus advances on to the phallus as the urethral groove. Ingrowth of this urethral groove is associated with the appearance of urethral plate tissue destined to canalise and form the definitive male anterior urethra.  Closure of the urethra is complete by around 15 weeks, with ingrowth of ectoderm from the tip of the glans forming the terminal portion of the urethra.

The testis
Tesicular descent is believed to occur in two distinct phases,  the first initiated by MIS,  the second being dependent upon exposure to testosterone.

Experimental studies in rats have indicated that the gubernaculum plays a key role in testicular descent (although the precise mechanism may be subject to some species variation).  Extending from the testis down to the region of the labioscrotal swellings,  the gubernaculum has the effect of anchoring the fetal testis in the proximity of the future inguinal canal.  Under the influence of testosterone, a second more active phase of testicular descent occurs between 25 and 30 weeks, when   the   gubernaculum   contracts   in   length, dragging the testis down the inguinal canal into the scrotal position it occupies at birth. During the course of its descent the testis is accompanied by a sac-like protrusion of peritoneum,  the processus vaginalis.

Agenesis of the upper two-thirds of the vagina (Rokitansky syndrome) reflects a failure of the paramesonephric ducts to fuse distally and merge with the urogenital sinus. Transverse vaginal septa and short atretic segments can be attributed to defective canalisation (Figure 1.14), whereas duplication anomalies such as bicornuate uterus represent incomplete fusion of the distal paramesonephric ducts (Figure 1.15). 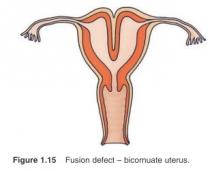 Female external genitalia
The aetiology and classification of disorders of sexual development (DSD) are considered in more detail in next Section. The most commonly encountered example in Western Europe is virilisation of the external genitalia in a female with a 46XX genotype resulting from congenital adrenal hyperplasia.

In affected individuals,  the internal reproductive   tract   differentiates   normally   but   the external genitalia virilise in response to high levels of circulating androgens of adrenal origin.

Male internal genitalia
The rare genetically determined syndrome of MIS   deficiency   is   characterised   by   bilateral undescended testes accompanied by the presence of persistent paramesonephric duct structures, including fallopian tubes and uterus.  A receptor defect is responsible for approximately 50%  of cases, whereas the remaining cases are genuinely attributable to a deficiency of this hormone. With the exception of the undescended testes, the external genitalia virilise normally as this is not dependent on MIS.

The persistence of a mûllerian sac-like prostatic utricle is predominantly a feature of impaired virilisation and patients with proximal hypospadias or DSD account for more than 90% of cases.

Male external genitalia
Hypospadias   results   from   varying   degrees   of incomplete closure of the urethral groove (although distal glanular hypospadias may simply represent failure of ectodermal ingrowth). Severe hypospadias, particularly when accompanied by cryptorchidism and a persistent mûllerian utriculus,  is evidently the outcome of a generalised virilisation defect.

However,  although isolated endocrinopathies have occasionally been identified in such cases, as yet no single endocrine defect has been implicated in the aetiology of hypospadias.

The combination of a blind-ending vas and histological findings of calcification and haemosiderin in ‘nubbins’  of residual testicular tissue suggests that most cases of so-called testicular ‘agenesis’ result from testicular torsion in utero.