The character of the pain depends on the location. Calculi small enough to venture down the ureter usually have difficulty passing through the ureteropelvic junction, over the iliac vessels,  or entering the bladder at the ureterovesical junction (Figure 16–7).

A. PAIN
Renal colic and noncolicky renal pain are the 2 types of pain originating from the kidney.  Renal colic usually is caused by stretching of the collecting system or ureter, while noncolicky renal pain is caused by distention of the renal capsule. These symptoms may overlap, making a clinical differentiation difficult or impossible. Urinary obstruction is the main mechanism responsible for renal colic. This may be mimicked by the pain a patient experiences when a retrograde ureteropyelogram is performed under local anesthesia, with excessive pressure resulting in overdistention of the collecting system. This pain is due to a direct increase in intraluminal pressure, stretching nerve endings.

Renal colic does not always wax and wane or come in waves like intestinal or biliary colic but may be relatively constant.  Renal colic implies an intraluminal origin.

Patients with renal calculi have pain primarily due to urinary obstruction.

Local mechanisms such as inflammation, edema, hyperperistalsis, and mucosal irritation may contribute to the perception of pain in patients with renal calculi. In the ureter, however, local pain is referred to the distribution of the ilio-inguinal nerve and the genital branch of the genitofemoral nerve, whereas pain from obstruction is referred to the same areas as for collecting system calculi (flank and costovertebral angle), thereby allowing discrimination.

The vast majority of urinary stones present with the acute onset of pain due to acute obstruction and distention of the upper urinary tract. The severity and location of the pain can vary from patient to patient due to stone size, stone location, degree of obstruction, acuity of obstruction, and variation in individual anatomy (eg, intrarenal versus extrarenal pelvis).  The stone burden does not correlate with the severity of the symptoms.  Small ureteral stones frequently present with severe pain,  while large staghorn calculi may present with a dull ache or flank discomfort.

The pain frequently is abrupt in onset and severe and may awaken a patient from sleep. The severity of the pain is worsened by the unexpected nature of its onset. Patients frequently move constantly into unusual positions in an attempt to relieve the pain. This movement is in contrast to the lack of movement of someone with peritoneal signs; such a patient lies in a stationary position.

The symptoms of acute renal colic depend on the location of the calculus; several regions may be involved: renal calyx, renal pelvis, upper and midureter, and distal ureter.

An orderly progression of symptoms as a stone moves down the urinary tract is the exception.

1. Renal calyx–
Stones or other objects in calyces or caliceal diverticula may cause obstruction and renal colic. In general,  nonobstructing stones cause pain only periodically,  owing to intermittent obstruction.  The pain is a deep, dull ache in the flank or back that can vary in intensity from severe to mild. The pain may be exacerbated after consumption of large amounts of fluid.  Radiographic imaging may not reveal evidence of obstruction despite the patient’s complaints of intermittent symptoms. It remains unclear how much of this pain is related to local mucosal irritation with activation of chemoreceptors. The presence of infection or inflammation in the calyx or diverticulum (eg, milk of calcium) in addition to obstruction may contribute to pain perception.  Caliceal calculi occasionally result in spontaneous perforation with urinoma, fistula, or abscess formation.

Figure 16–7.  Radiation of pain with various types of ureteral stone. Upper left: Ureteropelvic stone. Severe costovertebral angle pain from capsular and pelvic distention; acute renal and urethral pain from hyperperistalsis of smooth muscle of calyces, pelvis, and ureter, with pain radiating along the course of the ureter (and into the testicle, since the nerve supply to the kidney and testis is the same.) The testis is hypersensitive. Upper right: Midureteral stone. Same as above but with more pain in the lower abdominal quadrant. Left: Low ureteral stone. Same as above, with pain radiating into bladder, vulva, or scrotum. The scrotal wall is hyperesthetic.

Testicular sensitivity is absent. When the stone approaches the bladder, urgency and frequency with burning on urination develop as a result of inflammation of the bladder wall around the ureteral orifice.

Caliceal calculi are frequently small and numerous and appear to be able to pass spontaneously. Long-term retention against the flow of urine and against the forces of gravity and antegrade peristalsis suggests a significant element of obstruction.  Effective long-term treatment requires stone extraction and elimination of the obstructive component.

Pain relief has been reported in many patients following ESWL for small symptomatic caliceal calculi.

Thus, if a patient continues to complain of pain in the face of a small caliceal calculus, ESWL treatment may be justified for both diagnosis and treatment. Percutaneous,  retrograde,  and laparoscopic techniques have been successful in the management of calculi in calyces or caliceal diverticula.

2. Renal pelvis–
Stones in the renal pelvis > 1 cm in diameter commonly obstruct the ureteropelvic junction, generally causing severe pain in the costovertebral angle, just lateral to the sacrospinalis muscle and just below the 12th rib. This pain may vary from being dull to excruciatingly sharp and is usually constant, boring, and difficult to ignore. It often radiates to the flank and also anteriorly to the upper ipsilateral abdominal quadrant. It may be confused with biliary colic or cholecystitis if on the right side and with gastritis, acute pancreatitis, or peptic ulcer disease if on the left,  especially if the patient has associated anorexia,  nausea,  or emesis.  Acquired or congenital ureteropelvic junction obstruction may cause a similar constellation of symptoms. Symptoms frequently occur on an intermittent basis following a drinking binge or consumption of large quantities of fluid.

Partial or complete staghorn calculi that are present in the renal pelvis are not necessarily obstructive.  In the absence of obstruction,  these patients often have surprisingly few symptoms such as flank or back pain. Recurrent urinary tract infections frequently culminate in radiographic evaluation with the discovery of a staghorn calculus. If untreated, these “silent” staghorn calculi can often lead to significant morbidity, including renal deterioration, infectious complications, or both.

3. Upper and midureter–
Stones or other objects in the upper or midureter often cause severe, sharp back (costovertebral angle)  or flank pain.  The pain may be more severe and intermittent if the stone is progressing down the ureter and causing intermittent obstruction. A stone that becomes lodged at a particular site may cause less pain, especially if it is only partially obstructive. Stationary calculi that result in high-grade but constant obstruction may allow autoregulatory reflexes and pyelovenous and pyelolymphatic backflow to decompress the upper tract, with diminution in intraluminal pressure gradually easing the pain. Pain associated with ureteral calculi often projects to corresponding dermatomal and spinal nerve root innervation regions.

The pain of upper ureteral stones thus radiates to the lumbar region and flank.  Midureteral calculi tend to cause pain that radiates caudally and anteriorly toward the mid and lower abdomen in a curved, band-like fashion. This band initially parallels the lower costal margin but deviates caudad toward the bony pelvis and inguinal ligament. The pain may mimic acute appendicitis if on the right or acute diverticulitis if on the left side, especially if concurrent gastrointestinal symptoms are present.

4. Distal ureter–
Calculi in the lower ureter often cause pain that radiates to the groin or testicle in males and the labia majora in females. This referred pain is often generated from the ilioinguinal or genital branch of the genitofemoral nerves. Diagnosis may be confused with testicular torsion or epididymitis. Stones in the intramural ureter may mimic cystitis,  urethritis,  or prostatitis by causing suprapubic pain, urinary frequency and urgency, dysuria, stranguria,  or gross hematuria.  Bowel symptoms are not uncommon.  In women the diagnosis may be confused with menstrual pain, pelvic inflammatory disease, and ruptured or twisted ovarian cysts. Strictures of the distal ureter from radiation,  operative injury,  or previous endoscopic procedures can present with similar symptoms. This pain pattern is likely due to the similar innervation of the intramural ureter and bladder.

B. HEMATURIA
A complete urinalysis helps to confirm the diagnosis of a urinary stone by assessing for hematuria and crystalluria and documenting urinary pH.  Patients frequently admit to intermittent gross hematuria or occasional tea-colored urine (old blood). Most patients will have at least microhematuria.  Rarely (in 10–15%  of cases),  complete ureteral obstruction presents without microhematuria.

Rarely, matrix stones with minimal crystalline components are associated with urinary tract infections.  All stones, however,  may be associated with infections secondary to obstruction and stasis proximal to the offending calculus.

Culture-directed antibiotics should be administered before elective intervention.

Infection may be a contributing factor to pain perception. Uropathogenic bacteria may alter ureteral peristalsis by the production of exotoxins and endotoxins.  Local inflammation from infection can lead to chemoreceptor activation and perception of local pain with its corresponding referral pattern.

1. Pyonephrosis–
Obstructive calculi may culminate in the development of pyonephrosis.  Unlike pyelonephritis, pyonephrosis implies gross pus in an obstructed collecting system. It is an extreme form of infected hydronephrosis.

Presentation is variable and may range from asymptomatic bacteriuria to florid urosepsis. Bladder urine cultures may be negative.  Radiographic investigations are frequently nondiagnostic. Renal ultrasonography may be misguiding because of the nonspecific and variable appearance of pyonephrosis. Renal urine aspiration is the only way to make the definitive diagnosis.  If the condition is noted at the time of a percutaneous nephrolithotomy,  the procedure should be postponed to allow for adequate percutaneous drainage and treatment with appropriate intravenous antibiotics (Figure 16–8). If unrecognized and untreated, pyonephrosis may develop into a renocutaneous fistula.

2. Xanthogranulomatous pyelonephritis–
Xanthogranulomatous pyelonephritis is associated with upper-tract obstruction and infection.  One-third of patients present with calculi; two-thirds present with flank pain, fever, and chills. Fifty percent present with persistent bacteriuria. Urinalysis usually shows numerous red and white cells.  This condition is a common imitator of other pathologic states of the kidney. It usually presents in a unilateral fashion. Open surgical procedures, such as a simple nephrectomy for minimal or nonrenal function,  can be challenging owing to marked and extensive reactive tissues.

D. ASSOCIATED FEVER
The association of urinary stones with fever is a relative medical emergency.  Signs of clinical sepsis are variable and include fever, tachycardia, hypotension, and cutaneous vasodilation.

Costovertebral angle tenderness may be marked with acute upper-tract obstruction;  however,  it cannot be relied on to be present in instances of longterm obstruction. In such instances a mass may be palpable resulting from a grossly hydronephrotic kidney. Fever associated with urinary tract obstruction requires prompt decompression. This may be accomplished with a retrograde catheter (double-J,  or an externalized variety to serve as a port for selective urine collections, injection of contrast material,  or both).  If retrograde manipulations are unsuccessful,  insertion of a percutaneous nephrostomy tube is required. 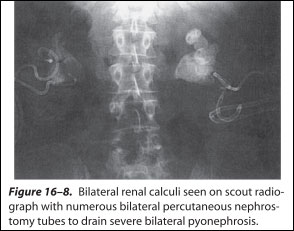 E. NAUSEA AND VOMITING
Upper-tract obstruction is frequently associated with nausea and vomiting.  Intravenous fluids are required to restore a euvolemic state.  Intravenous fluids should not be used to force a diuresis in an attempt to push a ureteral stone down the ureter. Effective ureteral peristalsis requires coaptation of the ureteral walls and is most effective in a euvolemic state.