A. DIFFERENTIAL DIAGNOSIS
Urinary stones can mimic other retroperitoneal and peritoneal pathologic states.  A full differential diagnosis of the acute abdomen should be made, including acute appendicitis, ectopic and unrecognized pregnancies, ovarian pathologic conditions including twisted ovarian cysts, diverticular disease,  bowel obstruction,  biliary stones with and without obstruction, peptic ulcer disease, acute renal artery embolism, and abdominal aortic aneurysm, to mention a few.  Peritoneal signs should be sought during physical examination.

B. HISTORY
A proper evaluation requires a thorough medical history.
The nature of the pain should be evaluated, including its onset, character, potential radiation, activities that exacerbate or ease the pain,  associated nausea and vomiting or gross hematuria,  and a history of similar pain.  Patients with previous stones frequently have had similar types of pain in the past, but not always.

Stone formers, especially those with calcium oxalate stones, frequently excrete more calcium oxalate crystals, and those crystals are larger than normal >12 mm). The rate of stone formation is proportional to the percentage of large crystals and crystal aggregates. Crystal production is determined by the saturation of each salt and the urinary concentration of inhibitors and promoters.

2. Socioeconomic factors–
Renal stones are more common in affluent, industrialized countries. Immigrants from less industrialized nations gradually increase their stone incidence and eventually match that of the indigenous population. Use of soft water does not decrease the incidence of urinary stones.

3. Diet–
Diet may have a significant impact on the incidence of urinary stones. As per capita income increases the average diet changes,  with an increase in saturated and unsaturated fatty acids, an increase in animal protein and sugar,  and a decrease in dietary fiber,  vegetable protein, and unrefined carbohydrates. A less energy-dense diet may decrease the incidence of stones. This fact has been documented during war years when diets containing minimal fat and protein resulted in a decreased incidence of stones.

Vegetarians may have a decreased incidence of urinary stones.  High sodium intake is associated with increased urinary sodium, calcium, and pH, and a decreased excretion of citrate; this increases the likelihood of calcium salt crystallization because the urinary saturation of monosodium urate and calcium phosphate (brushite) is increased.

Fluid intake and urine output may have an effect on urinary stone disease.  The average daily urinary output in stone formers is 1.6 L/day.

4. Occupation–
Occupation can have an impact on the incidence of urinary stones.  Physicians and other white-collar workers have an increased incidence of stones compared with manual laborers. This finding may be related to differences in diet but also may be related to physical activity; physical activity may agitate urine and dislodge crystal aggregates. Individuals exposed to high temperatures may develop higher concentrations of solutes owing to dehydration,  which may have an impact on the incidence of stones.

5. Climate–
Individuals living in hot climates are prone to dehydration, which results in an increased incidence of urinary stones, especially uric acid calculi. Although heat may cause a higher fluid intake, sweat loss results in lowered voided volumes. Hot climates usually expose people to more ultraviolet light,  increasing vitamin D3 production. Increased calcium and oxalate excretion has been correlated with increased exposure time to sunlight. This factor has more impact on light-skinned people and may help explain why African Americans in the United States have a decreased stone incidence.

7. Medications–
A thorough history of medications taken may provide valuable insight into the cause of urinary calculi. The antihypertensive medication triamterene is found as a component of several medications, including Dyazide, and has been associated with urinary calculi with increasing frequency. Long-term use of antacids containing silica has been associated with the development of silicate stones. Carbonic anhydrase inhibitors may be associated with urinary stone disease (10–20% incidence). The long-term effect of sodium- and calcium-containing medications on the development of renal calculi is not known.

Protease inhibitors in immunocompromised patients are associated with radiolucent calculi.

D. PHYSICAL EXAMINATION
A detailed physical examination is an essential component of the evaluation of any patient suspected of having a urinary calculus. The patient presenting with acute renal colic typically is in severe pain, often attempting to find relief in multiple, frequently bizarre positions.

This fact helps differentiate patients with this condition from those with peritonitis, who are afraid to move. Systemic components of renal colic may be obvious, with tachycardia, sweating, and nausea often prominent. Costovertebral angle tenderness may be apparent. An abdominal mass may be palpable in patients with long-standing obstructive urinary calculi and severe hydronephrosis.

Fever, hypotension, and cutaneous vasodilation may be apparent in patients with urosepsis. In such instances there is an urgent need for decompression of the obstructed urinary tract,  massive intravenous fluid resuscitation,  and intravenous antibiotics.  Occasionally,  intensive-care support is needed.

E. RADIOLOGIC INVESTIGATIONS
1. Computed tomography–
Noncontrast   spiral   CT scans are now the imaging modality of choice in patients presenting with acute renal colic. It is rapid and is now less expensive than an intravenous pyelogram (IVP). It images other peritoneal and retroperitoneal structures and helps when the diagnosis is uncertain. It does not depend on an experienced radiologic technician to obtain appropriate oblique views when there is confusion with overlying bowel gas in a nonprepped abdomen. There is no need for intravenous contrast.  Distal ureteral calculi can be confused with phleboliths. These images do not give anatomic details as seen on an IVP (for example, a bifid collecting system) that may be important in planning intervention. If intravenous contrast material is used during the study,  a KUB film can give additional helpful information.  Uric acid stones are visualized no differently from calcium oxalate stones.  Matrix calculi have adequate amounts of calcium to be visualized easily by CT.

Extraosseous calcifications on radiographs may be erroneously assumed to be urinary tract calculi (Figure 16–14).

Oblique views easily differentiate gallstones from right renal calculi. Static hard-copy films can be interpreted by most clinicians.  Anecdotally,  small ureteral stones have passed spontaneously during such studies. An inadequate bowel preparation, associated ileus and swallowed air, and lack of available technicians may result in a less than ideal study when obtained during acute renal colic. A delayed, planned IVP may result in a superior study.

Acute forniceal rupture is not uncommonly associated with a highly obstructive ureteral calculus. It may result in dramatic radiographs but is of no clinical significance, and no intervention is required. The rupture may be precipitated by the osmotic diuresis of the intravenous contrast agent based solely on radiographs. 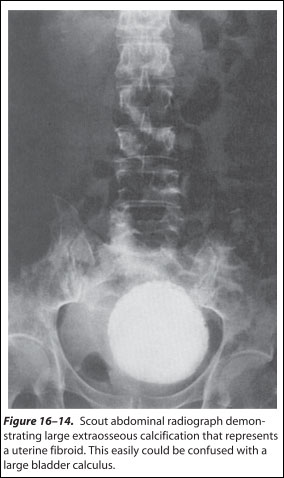 Figure 16–14.  Scout abdominal radiograph demonstrating large extraosseous calcification that represents a uterine fibroid. This easily could be confused with a large bladder calculus.

Acute forniceal rupture is not uncommonly associated with a highly obstructive ureteral calculus. It may result in dramatic radiographs but is of no clinical significance, and no intervention is required. The rupture may be precipitated by the osmotic diuresis of the intravenous contrast agent based solely on radiographs.

3. Tomography–
Renal tomography is useful to identify calculi in the kidney when oblique views are not helpful. It visualizes the kidney in a coronal plane at a set distance from the top of the x-ray table.  This study may help identify poorly opacified calculi, especially when interfering abdominal gas or morbid obesity make KUB films suboptimal.

4. KUB films and directed ultrasonography–
A KUB film and renal ultrasound may be as effective as an IVP in establishing a diagnosis. The ultrasound examination should be directed by notation of suspicious areas seen on a KUB film; it is, however, operator-dependent. The distal ureter is easily visualized through the acoustic window of a full bladder. Edema and small calculi missed on an IVP can be appreciated with such studies.

5. Retrograde pyelography–
Retrograde pyelography occasionally is required to delineate upper-tract anatomy and localize small or radiolucent offending calculi.  Bulb ureterograms frequently leak contrast material back into the bladder, resulting in a suboptimal study. Advancing an angiographic exchange catheter with or without the aid of a guidewire 3–4 cm into the ureter is an alternative technique. Intermittent fluoroscopic images direct appropriate injection volumes and help reduce the likelihood of pyelolymphatic, pyelosinus, and pyelovenous reflux. 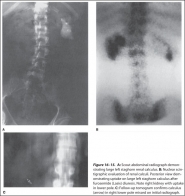