A. CALCIUM
Calcium is a major ion present in urinary crystals.  Only 50% of plasma calcium is ionized and available for filtration at the glomerulus. Well over 95% of the calcium filtered at the glomerulus is reabsorbed at both the proximal and distal tubules and limited amounts in the collecting tube. Less than 2% is excreted in the urine. Diuretic medications may exert a hypocalciuric effect by further decreasing calcium excretion.

Many factors influence the availability of calcium in solution,  including complexation with citrate,  phosphate, and sulfate. An increase in monosodium urates and a decrease in urinary pH further interfere with this complexation and therefore promote crystal aggregation.

B. OXALATE
Oxalate is a normal waste product of metabolism and is relatively insoluble. Normally, approximately 10–15% of oxalate found in the urine originates from the diet; the vast majority is a metabolic by-product.  Most of the oxalate that enters the large bowel is consumed by bacterial decomposition. Diet, however, can have an impact on the amount of oxalate found in the urine.

Once absorbed from the small bowel, oxalate is not metabolized and is excreted almost exclusively by the proximal tubule. The presence of calcium within the bowel lumen is an important factor influencing the amount of oxalate that is absorbed.  The control of oxalate in the urine plays a pivotal role in the formation of calcium oxalate calculi.  Normal excretion ranges from 20 to 45 mg/day and does not change significantly with age. Excretion is higher during the day when one eats. Small changes in oxalate levels in the urine can have a dramatic impact on the supersaturation of calcium oxalate. The principal precursors of oxalate are glycine and ascorbic acid; however, the impact of ingested vitamin C (<2 g/day) is negligible.

Hyperoxaluria may develop in patients with bowel disorders,  particularly inflammatory bowel disease,  small-bowel resection, and bowel bypass. Renal calculi develop in 5–10% of patients with these conditions. Chronic diarrhea with fatty stools results in a saponification process.

Intraluminal calcium binds to the fat,  thereby becoming unavailable to bind to oxalate.  The unbound oxalate is readily absorbed.

Excessive oxalate may occur secondary to the accidental or deliberate ingestion of ethylene glycol (partial oxidation to oxalate). This may result in diffuse and massive deposition of calcium oxalate crystals and may occasionally lead to renal failure.

C. PHOSPHATE
Phosphate is an important buffer and complexes with calcium in urine. It is a key component in calcium phosphate and magnesium ammonium phosphate stones. The excretion of urinary phosphate in normal adults is related to the amount of dietary phosphate (especially in meats,  dairy products, and vegetables). The small amount of phosphate filtered by the glomerulus is predominantly reabsorbed in the proximal tubule.

Parathyroid hormone inhibits this reabsorption. The predominant crystal found in those with hyperparathyroidism is phosphate, in the form of hydroxyapatite,  amorphous calcium phosphate,  and carbonate apatite.

Rarely,  a defect in xanthine oxidase results in increased levels of xanthine; the xanthine may precipitate in urine, resulting in stone formation.  Unusual alterations in adenine metabolism may result in the production of 2,  8- dihydroxyadeninuria, which is poorly soluble in urine and may develop into a urinary stone. This results from a deficiency of adenine phosphoribosyltransferase (APRT). Pure uric acid crystals and calculi are typically radiolucent in nature and may not be identified on plain abdominal films (Figure 16–2). They are visible on noncontrast CT images.

Some uric acid calculi may be partially radiopaque, however, because of associated calcium deposits.

E. SODIUM
Although not identified as one of the major constituents of most urinary calculi,  sodium plays an important role in regulating the crystallization of calcium salts in urine.

Sodium is found in higher than expected concentrations in the core of renal calculi and may play a role in initiating crystal development and aggregation. High dietary sodium intake increases urinary calcium excretion. This reduces the ability of urine to inhibit calcium oxalate crystal agglomeration.  These effects are thought to be due to a sodium-induced increase in bicarbonaturia and decrease in serum bicarbonate.  Conversely,  a reduction in dietary sodium helps to reduce recurrent calcium nephrolithiasis. 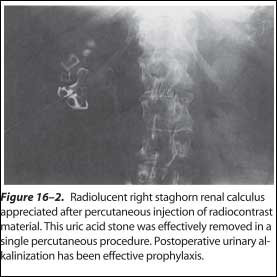 F. CITRATE
Citrate is a key factor affecting the development of calcium urinary stones. A deficiency commonly is associated with stone formation in those with chronic diarrhea or renal tubular acidosis type I (distal tubular defect) and in patients undergoing chronic thiazide therapy.  Citrate plays a pivotal role in the citric acid cycle in renal cells.

The exact mechanism whereby magnesium exerts its effect is undefined. Dietary magnesium supplements do not protect against stone formation in normal people.

H. SULFATE
Urinary sulfates may help prevent urinary calculi.  They can complex with calcium. These sulfates occur primarily as components of longer urinary proteins,  such as chondroitin sulfate and heparin sulfate.

I. OTHER URINARY STONE INHIBITORS
Inhibitors of urinary stone formation other than citrate, magnesium, and sulfates have been identified. These consist predominantly of urinary proteins and other macromolecules such as glycosaminoglycans,  pyrophosphates, and uropontin.  Although citrate appears to be the most active inhibitory component in urine,  these substances demonstrate a substantial role in preventing urine crystal formation. The N–terminal amino acid sequence and the acidic amino acid content of these protein inhibitors, especially their high aspartic acid content, appear to play pivotal inhibitory roles. Fluoride may be an inhibitor of urinary stone formation.