A. CALCIUM CALCULI
Calcifications can occur and accumulate in the collecting system,  resulting in nephrolithiasis.  Eighty to eighty-five percent of all urinary stones are calcareous.

Symptoms are secondary to obstruction, with resultant pain, infection, nausea and vomiting, and rarely culminate in renal failure. Asymptomatic hematuria or repetitive urinary tract infections recalcitrant to apparently appropriate antibiotics should lead one to suspect a urinary stone. Calcifications within the parenchyma of the kidney, known as nephrocalcinosis,  rarely cause symptoms,  however,  and usually are not amenable to traditional therapies appropriate for urinary stone disease (Figure 16–3). Nephrocalcinosis is frequently encountered with renal tubular acidosis and hyperparathyroidism. Nephrolithiasis and nephrocalcinosis frequently coexist. Most patients with nephrolithiasis, however, do not have obvious nephrocalcinosis.

Nephrocalcinosis may result from a variety of pathologic states. Ectatic collecting tubules, as seen with medullary sponge kidney, are common. This is frequently a bilateral process. Increased calcium absorption from the small bowel is common with sarcoidosis, milk-alkali syndrome, hyperparathyroidism, and excessive vitamin D intake. Disease processes resulting in bony destruction,  including hyperparathyroidism,  osteolytic   lesions,  and   multiple myeloma, are a third mechanism. Finally, dystrophic calcifications forming on necrotic tissue may develop after a renal insult.

1. Absorptive hypercalciuric nephrolithiasis –
Normal calcium intake averages approximately 900–1000 mg/day.  Approximately one-third is absorbed by the small bowel, and of that portion approximately 150–200 mg is obligatorily excreted in the urine. A large reservoir of calcium remains in the bone. Most dietary calcium is excreted in the stool.  Absorptive hypercalciuria is secondary to increased calcium absorption from the small bowel,  predominantly from the jejunum. This results in an increased load of calcium filtered from the glomerulus. The result is suppression of parathyroid hormone, leading to decreased tubular reabsorption of calcium, culminating in hypercalciuria (>4 mg/kg). This physiologic cascade is in response to the primary defect, an increased absorption of calcium from the small bowel. 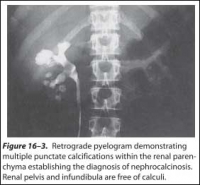 Absorptive hypercalciuria can be subdivided into 3 types. Type I absorptive hypercalciuria is independent of diet and represents 15% of all calcareous calculi. There is an elevated urinary calcium level (>150–200 mg/24 h) even during a calcium-restricted diet. Cellulose phosphate is an effective nonabsorbable exchange resin.  This effectively binds the calcium in the gut,  preventing bowel absorption. Cellulose phosphate has no impact on the calcium transport defect.  Urinary calcium excretion returns to normal values with therapy.

Cellulose phosphate must be taken with meals to be available when calcium is ingested. A typical dose is 10–15 g orally in 3 divided doses and is well tolerated. This therapy is relatively contraindicated in postmenopausal women and in children during their active growth cycles. Inappropriate use may lead to a negative calcium balance and a secondary hyperparathyroid state. As with all stone formers, long-term follow-up is required. Cellulose phosphate may bind other cations besides calcium, including magnesium.  Secondary hyperoxaluria may develop owing to decreased calcium in the gut. See the section on hyperoxaluria for a more detailed discussion.
Hydrochlorothiazides are an alternative treatment for type I absorptive hypercalciuria. Initially there is a reduction in renal excretion of calcium. The increased absorbed calcium is likely deposited in bone.  Eventually the bone reservoir reaches its capacity and the drug becomes ineffective. Hydrochlorothiazides have limited long-term efficacy (approximately 3–5 years). These drugs have no effect on the defective bowel transport system.  Hydrochlorothiazides may be alternated with cellulose phosphate as an effective treatment regimen.

Type III absorptive hypercalciuria is secondary to a phosphate renal leak and accounts for 5%  of all urinary calculi. Decreased serum phosphate leads to an increase in 1, 25-dihydroxyvitamin D synthesis. The physiologic cascade culminates in an increased absorption of phosphate and calcium from the small bowel and an increased renal excretion of calcium-hence its classification as absorptive hypercalciuria.  Successful treatment replaces bioavailable phosphate.  Orthophosphate (Neutra-Phos)  inhibits vitamin D synthesis and is administered as 250 mg three to four times daily. It is best taken after meals and before bedtime.  Orthophosphates do not alter intestinal calcium absorption.

Parathyroid hormone results in a cascade of events starting with an increase in urinary phosphorus and a decrease in plasma phosphorus, followed by an increase in plasma calcium and a decrease in urinary calcium.  Its action on the kidney and on the bone is independent of each other.  Ultimately renal damage is secondary to the hypercalcemia.  It limits the concentrating ability of the kidney and impairs the kidney’s ability to acidify urine.

Surgical removal of the offending parathyroid adenoma is the only effective way of treating this disease. Attempts at medical management are futile.

3.  Renal-induced hypercalciuric nephrolithiasis–
Hypercalciuria of renal origin is due to an intrinsic renal tubular defect in calcium excretion. This creates a physiologically vicious cycle. Excessive urinary calcium excretion results in a relative decrease in serum calcium, which leads to a secondarily increased parathyroid hormone level that mobilizes calcium from the bone and increases calcium absorption from the gut. This step completes the pathologic cycle by delivering increased levels of calcium back to the kidney,  whereby the renal tubules excrete large amounts of calcium. These patients have an elevated fasting urinary calcium level, normal serum calcium level, and an elevated parathyroid hormone level.

Renal hypercalciuria is effectively treated with hydrochlorothiazides. Unlike their role in type I absorptive hypercalciuria, in this setting hydrochlorothiazides have a durable long-term effect. As a diuretic, they decrease the circulating blood volume and subsequently stimulate proximal tubular absorption of calcium as well as other constituents.  They also increase reabsorption at the distal tubule. Both mechanisms correct the secondary hyperparathyroid state.

Patients with excessive purine intake can be effectively treated by changing their diet to one with low purines.

Those with excessive endogenous uric acid production can be successfully treated with allopurinol. Allopurinol is a xanthine oxidase inhibitor. Allopurinol reduces uric acid synthesis and renal excretion of uric acid. It also inhibits uric acid-calcium oxalate crystallization.  Allopurinol has many potential side effects, including a variety of skin rashes and liver toxicity, and should be administered with careful monitoring (300 mg daily).  Potassium citrate is an alternative treatment, especially when associated with hypocitraturia.

5. Hyperoxaluric calcium nephrolithiasis–
Hyperoxaluric calcium nephrolithiasis is secondary to increased urinary oxalate levels (>40 mg/24 h). It is frequently found in patients with inflammatory bowel disease or other chronic diarrheal states that result in severe dehydration. It is rarely associated with excessive oxalate intake, as seen in poisoning with ethylene glycol or endogenous overproduction.

Chronic diarrheal states alter oxalate metabolism. Malabsorption leads to increased luminal fat and bile. Intraluminal calcium readily binds to fat, resulting in a saponification process. Urinary calcium levels are usually low (<100 mg/24 h).  The intraluminal gut calcium that normally would have bound to oxalate is decreased. The unbound oxalate is readily absorbed and is unaffected by the usual metabolic inhibitors of energy-dependent pumps. Bile salts may increase the passive bowel absorption of oxalate.

A small increase in oxalate absorption and subsequent urinary excretion dramatically increases the formation product of calcium oxalate. This increases the potential for heterogeneous nucleation and crystal growth in this metastable environment. All patients with increased urinary excretion of oxalate do not form calcium oxalate calculi. Other factors must be contributory,  therefore,  including dehydration, hypocitraturia (associated with an acidosis), decreased excretion of urinary inhibitors including magnesium, and protein malabsorption.

Enteric hyperoxaluric calcium nephrolithiasis is successfully treated with oral calcium supplementation.  The calcium binds to the intraluminal oxalate and limits its absorption. It must be given with meals when the oxalate is present. Other oral cations are effective, including magnesium supplements. An alternative therapy includes a diet limited to medium-chain fatty acids and triglycerides; however, it is poorly tolerated by patients. Equally difficult is an attempt to alter oxalate intake. Unless large amounts of specific oxalate-rich foods can be excluded, an alternative diet may result in increased oxalate levels.

Primary hyperoxaluria is a rare hereditary disease. It is associated with calcium oxalate renal calculi, nephrocalcinosis, and other distant deposits of oxalate, culminating in progressive renal failure and eventual death. Type I is associated with an enzyme deficiency of 2-oxoglutarate: glyoxylate carboligase, resulting in elevated urinary levels of glycolic acid and oxalic acid. Type II has increased excretory levels of L–glyceric acid rather than elevated levels of glycolic acid. It is associated with a D–glycerate dehydrogenase enzyme deficiency. This ultimately results in the accumulation of hydroxypyruvate, which is eventually converted to oxalate.  Oxalate crystal deposits develop rapidly in transplanted kidneys. Combined liver and renal transplantation has cured this previously fatal rare disease.

6. Hypocitraturic calcium nephrolithiasis–
Citrate is an important inhibitor of urinary stone disease. Increased metabolic demands on the mitochondria of renal cells decrease the excretion of citrate. Such conditions include intracellular metabolic acidosis, hypokalemia (as with thiazide therapy), fasting, hypomagnesemia, androgens, gluconeogenesis, and an acid-ash diet. Citrate may be consumed in the urine by bacteria during a urinary tract infection.

The cause of hypocitraturia may be unknown in some cases. In contrast, alkalosis, alkaline-ash diet, estrogen, and vitamin D increase urinary citrate levels.

Routine dosage is 20–30 mEq two to three times daily and is usually well tolerated. Six to eight glasses of lemonade can increase urinary citrate excretion by approximately 150 mg/24 h and thus either limit or eliminate the need for pharmacologic citrate supplementation.