Mineralization in all biologic systems has a common theme in that the crystals and matrix are intertwined. Urinary stones are no exception; they are polycrystalline aggregates composed of varying amounts of crystalloid and organic matrix.  Theories to explain urinary stone disease are incomplete.  Stone formation requires supersaturated urine.  Supersaturation depends on urinary pH,  ionic strength, solute concentration, and complexation. Urinary constituents may change dramatically during different physiologic states from a relatively acid urine in a first morning void to an alkaline tide noted after meals. Ionic strength is determined primarily by the relative concentration of monovalent ions.  As ionic strength increases,  the activity   coefficient   decreases.  The   activity   coefficient reflects the availability of a particular ion.

The concentration products of most ions are greater than established solubility products. Other factors must play major roles in the development of urinary calculi, including complexation. Complexation influences the availability of specific ions.  For instance,  sodium complexes with oxalate and decreases its free ionic form, while sulfates can complex with calcium.  Crystal formation is modified by a variety of other substances found in the urinary tract,  including magnesium,  citrate,  pyrophosphate, and a variety of trace metals. These inhibitors may act at the active crystal growth sites or as inhibitors in solution (as with citrate).

The nucleation theory suggests that urinary stones originate from crystals or foreign bodies immersed in supersaturated urine. This theory is challenged by the same arguments that support it.  Stones do not always form in patients who are hyperexcretors or who are at risk for dehydration.  Additionally,  many stone formers’  24-hour urine collections are completely normal with respect to stone-forming ion concentrations.

The crystal inhibitor theory claims that calculi form owing to the absence or low concentration of natural stone inhibitors,  including magnesium,  citrate,  pyrophosphate, and a variety of trace metals.  This theory does not have absolute validity since many people lacking such inhibitors may never form stones, and others with an abundance of inhibitors may, paradoxically, form them.

A. CRYSTAL COMPONENT
Stones are composed primarily of a crystalline component.

Crystals of adequate size and transparency are easily identified under a polarizing microscope.  X-ray diffraction is preferred to assess the geometry and architecture of calculi.

A group of stones from the same geographic location or the same historical time period typically have crystalline constituents that are common.

Multiple steps are involved in crystal formation, including nucleation, growth, and aggregation. Nucleation initiates the stone process and may be induced by a variety of substances, including proteinaceous matrix, crystals,  foreign bodies,  and other particulate tissues.

Heterogeneous nucleation (epitaxy), which requires less energy and may occur in less saturated urine, is a common theme in stone formation. It should be suspected whenever an oriented conglomerate is found. A crystal of one type thereby serves as a nidus for the nucleation of another type with a similar crystal lattice. This is frequently seen with uric acid crystals initiating calcium oxalate formation. It takes time for these early nidi to grow or aggregate to form a stone incapable of passing with ease through the urinary tract.

How these early crystalline structures are retained in the upper urinary tract without uneventful passage down the ureter is unknown. The theory of mass precipitation or intranephronic calculosis suggests that the distal tubules or collecting ducts,  or both,  become plugged with crystals, thereby establishing an environment of stasis, ripe for further stone growth.  This explanation is unsatisfactory; tubules are conical in shape and enlarge as they enter the papilla, thereby reducing the possibility of ductal obstruction. Additionally, urine transit time from the glomerulus into the renal pelvis is only a few minutes, making crystal aggregation and growth within the uriniferous tubules unlikely.

The fixed particle theory postulates that formed crystals are somehow retained within cells or beneath tubular epithelium. Randall noted whitish-yellow precipitations of crystalline substances occurring on the tips of renal papillae as submucosal plaques.  These can be appreciated during endoscopy of the upper urinary tract.  Carr hypothesized that calculi form in obstructed lymphatics and then rupture into adjacent fornices of a calyx. Arguing against Carr’s theory are the grossly visible early stone elements in areas remote from fornices.

B. MATRIX COMPONENT
The amount of the noncrystalline matrix component of urinary stones varies with stone type,  commonly ranging from 2% to 10% by weight. It is composed predominantly of protein, with small amounts of hexose and hexosamine.

An unusual type of stone called a matrix calculus can be associated with previous kidney surgery or chronic urinary tract infections and has a gelatinous texture (Figure 16–1). 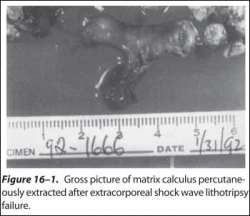 Histologic inspection reveals laminations with scant calcifications. On plain abdominal radiographs, matrix calculi are usually radiolucent and can be confused with other filling defects, including blood clots, upper-tract tumors, and fungal bezoars. Computed tomography (CT) reveals calcifications and can help to confirm the diagnosis.

The role of matrix in the initiation of ordinary urinary stones as well as matrix stones is unknown. It may serve as a nidus for crystal aggregation or as a naturally occurring glue to adhere small crystal components and thereby hinder uneventful passage down the urinary tract. Alternatively, the matrix may have an inhibitory role in stone formation or may be an innocent bystander, playing no active role in stone formation.