Men with a specific pattern of baldness at age 45 have a 40% increased risk of later developing aggressive prostate cancer, according to a new study published in the Journal of Clinical Oncology.

Increasingly, evidence is suggesting that both prostate cancer and male pattern baldness are linked to increased levels of androgens (male sex hormones) and androgen receptors.

In 2013, Medical News Today reported on a study from researchers at the University of Pennsylvania in Philadelphia, who found that African-American men who experience baldness were 69% more likely to develop prostate cancer than those with no baldness.

Further examining the link between baldness and prostate cancer risk, researchers from the Division of Cancer Epidemiology and Genetics at the National Cancer Institute in Bethesda, MD, analyzed questionnaire data from 39,070 men aged 55-74 as part of the US PLCO Cancer Screening Trial.
Frontal and moderate crown baldness ‘linked to higher risk of aggressive prostate cancer’

Using a pictorial tool, the men identified in the questionnaire what their hair-loss patterns were at age 45. 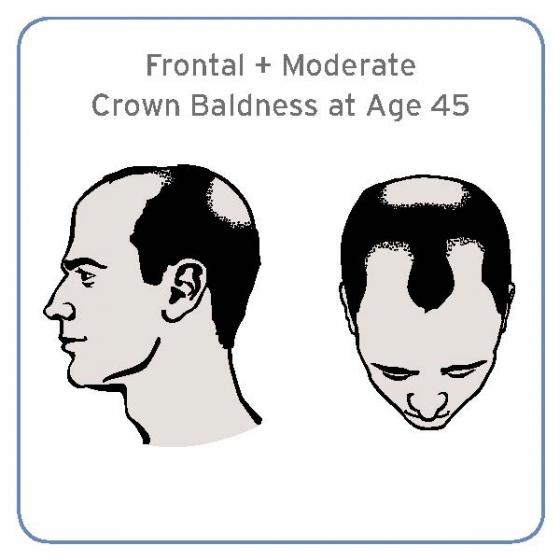 Using a pictorial tool, the men identified in the questionnaire what their hair-loss patterns were at age 45.
Image credit: American Society of Clinical Oncology

During the follow-up period, 1,138 of the men in the study group were diagnosed with prostate cancer. The mean age at the time of diagnosis was 72, and 51% of the cases were defined as “aggressive” cancers.

While our data show a strong possibility for a link between the development of baldness and aggressive prostate cancer, it’s too soon to apply these findings to patient care.”

Although the findings still need to be confirmed by further studies, the researchers believe that medical assessment of baldness may be useful in identifying men who are at increased risk for aggressive prostate cancer.

Next, the team will explore the relationship between male pattern baldness and risk of developing and dying from prostate cancer across two additional studies. One of these studies will include a dermatological assessment of male pattern baldness, considered to be more reliable than the self-reporting recall method used in the questionnaire study.